Skip to content
AMD GPU MeshMapper has reached end of life. AMD no longer supports GPU MeshMapper, but makes it available for download without warranty.

Lighting objects using information stored in auxiliary maps such as normal or ambient occlusion maps has become a de-facto standard for achieving high quality visuals. GPU MeshMapper re-invents the process of generating maps (including normal, displacement, and ambient occlusion maps) for a low-resolution mesh based on the details from a high-resolution mesh. The tool includes an intuitive user interface for controlling all aspects of map generation. The tool was designed with input from artists in order to tailor the interface to the digital asset creation process. A wide range of settings allows you to fine tune the map generation for your specific models. For complex models, generate maps for individual components and then use the MapComposer to recombine the maps so that the final result will have a proper scale and bias which takes full advantage of the available dynamic range.

Artists can quickly visualize how their objects will look with generated maps using the preview feature. If you’re using one of the AMD’s latest ATI Radeon graphics cards, the preview window allows you to render the low-resolution mesh with displacement and tessellation directly in the tool. Project and script files allow you to save your settings between uses and easily incorporate map generation into your current art pipeline. You can automate the generation process by using the batch scripting mode for quick integration into your game’s art pipeline.

For the complete list of features and bug fixes, please read the user documentation.

Requirements for previewing with displacement and tessellation:

Preview the high-res model (right) side-by-side with the low-res model (left). Models can be rendered as points, wireframe, and solid. Models can be colored according to the texture coordinates, tangent, binormal, vertex normals, base map, normal map, displacement map, ambient occlusion map, and with phong lighting. 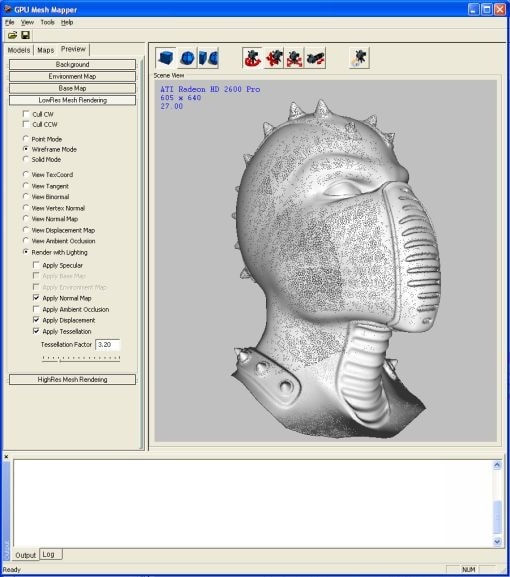 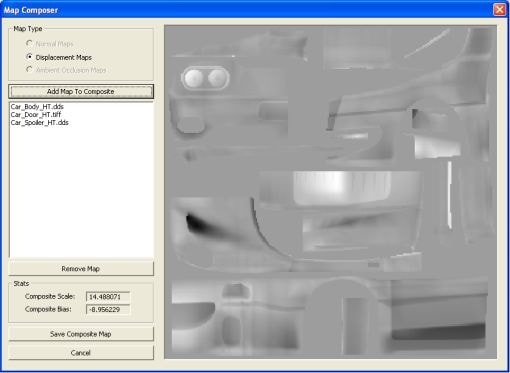 Use the MapComposer to easily combine multiple maps that will be applied to a single model. Displacement maps will be dynamically adjusted to ensure that the final map takes full advantage of the available dynamic range.