The prior post in this series established a base technique for adding grain, and now this post is going to look at very subtle changes to improve quality using the same 3-bit/channel quantization case from the prior post. The first change is to apply a clamped amount of sharpening prior to adding the grain. Grain can have a tendency to disrupt and mask fine detail. The sharpening is designed to increase the minimum contrast on an edge to the point where it survives the addition of grain. The second change is to adjust the Probability Density Function of the grain.

The image below to the left is a crop from the prior post: no sharpening and a Rectangular Probability Density Function (RPDF). To the left: sharpening and something similar to a Gaussian Probability Density Function (GPDF). The differences can be hard to spot, look in the upper right under the green leaves. The fine detail is better preserved for the vines. 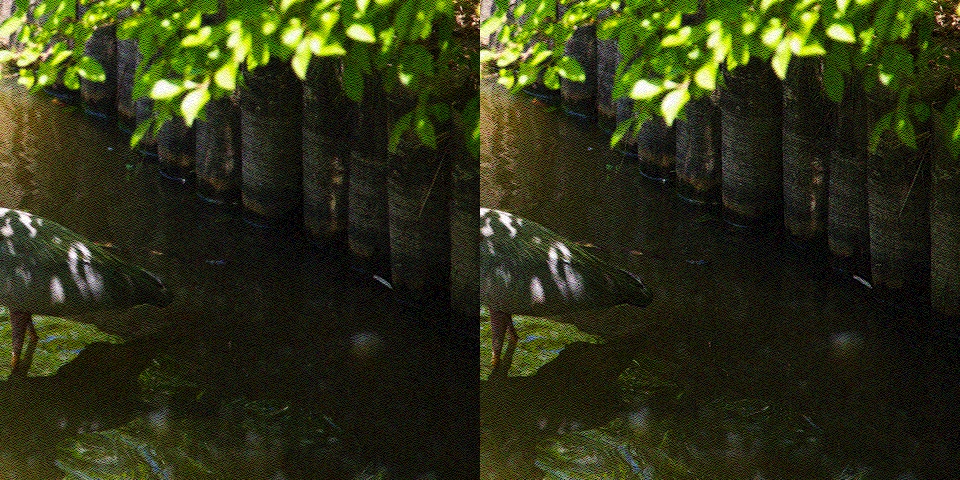 First the result for the TPDF, 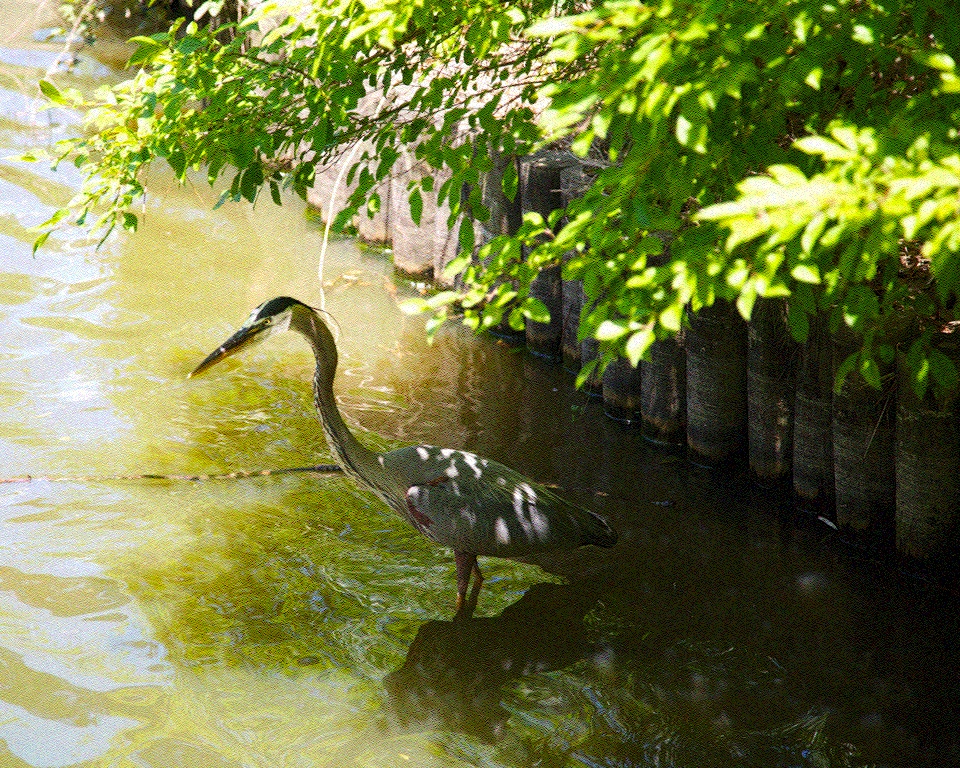 The TPDF reduces the amount of visible grain by reducing the probability of getting a grain value close to {-1} or {1}. This has a positive visual side effect of increasing clarity for fine detail. However this appears to have a non-energy conserving side effect as well: the quantized value is more likely to stay close to a band. In the above image the lower right dark colors move closer to black (in an area which has no full black values).

This is easier to see in the four cropped swatches below. From the left to right: {RPDF, GPDF proxy, TPDF, and original image}. 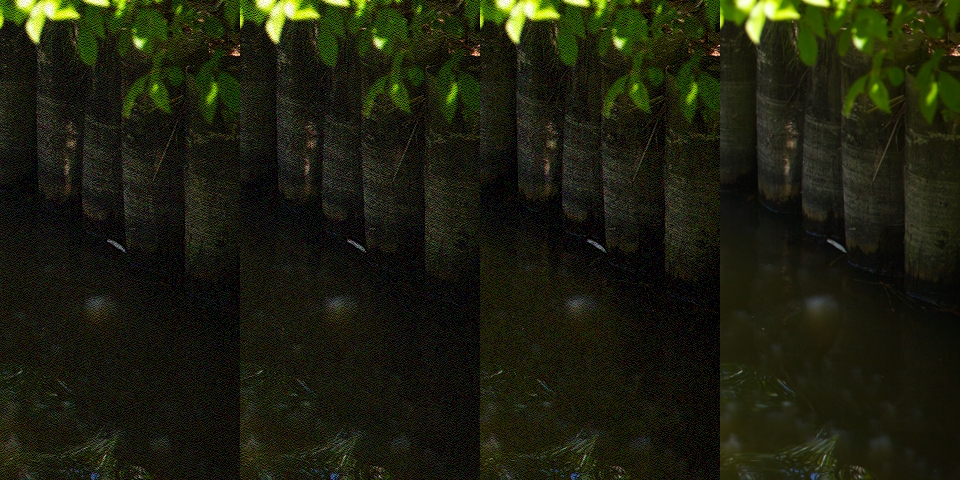 The GPDR proxy below, implemented via the smoothstep() function, provides a middle ground which does not exhibit as obvious tonal separation, 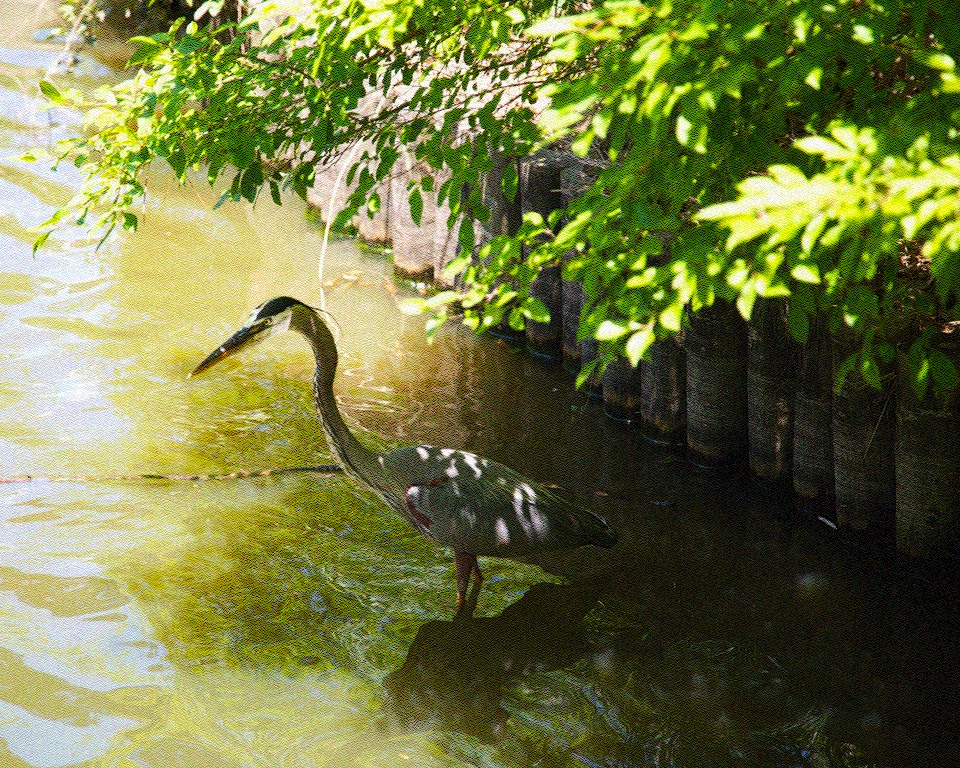 Regardless of application of grain/dithering in linear (this series) or after conversion to a non-linear output space (alternative method), the aim of these techniques is to remove banding regardless of bit-depth and maximize the visual quality of the pixel. These techniques applied temporally look substantially better.

Expanding on Advanced Techniques and Optimization of VDR Color Pipelines: Details on the generation of film grain ideal for transfer functions like sRGB.

Follow up on VDR and practical advice on adapting a game’s tonemapping pipeline to both traditional display signals and new HDR output signals.

Fetching From Cubes and Octahedrons

For GPU-side dynamically generated data structures which need 3D spherical mappings, two of the most useful mappings are cubemaps and octahedral maps. This post explores the overhead of both mappings.

An explanation of how GCN hardware coalesces memory operations to minimize traffic throughout the memory hierarchy.

This post takes a look at the interesting bits of helping id Software with their DOOM Vulkan effort, from the perspective of AMD’s Game Engineering Team.